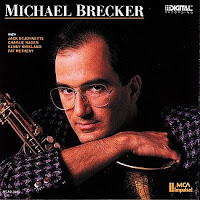 Like many saxophone players born before the 1997 I had a fascination with Michael Brecker. His contemporary tone seemed to fit into any genre he played and his humble nature made him seem most approachable. I would listen to anything of his I could get my hands on via taped radio performances or shared albums. I enjoyed just listening to him play, there was an energy and mood in his playing that was hard to match.

Through out the years my private lesson teachers would share interviews he had done for the various magazines and on various TV programs. His insight would eventually change they way I viewed my playing. Just knowing that Brecker did not instantly assimilate new ideas into his playing made the fact that I was struggling to add new ideas feel more normal. Also knowing that during his early days Brecker admitted to being a tad bit lazy with practicing, just like me. This took the mysticism out of the musical god and made him more like everyone else. The candid way he approached his interviews made me admire him as a musician and a person. What other top level musicians admit to not being as diligent at practicing as they know they should be? None that I know of. Linked here is one of my favorite workshops Brecker did as a much younger man than most of us remember.

Part of why I bring this video selection to the front is that at one point in this workshop he explains that the player should play what works for them and not what his/her idol plays on. We should all strive to play what works for us as individuals and not follow the mouthpiece fad of the day. The man was a trend setter and a humble person.

Side Note: In case you missed it he is playing a “Selmer Saxophone”, Dukoff D9 with LaVoz Medium reeds.