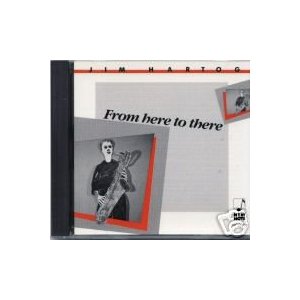 This album was suggested to me by a reader and I had to find it on Amazon. Until this album I was only familiar with Jim Hartog as the baritone player of 29th Street Saxophone Quartet. This album is his project outside of that group.  This album proved to be an interesting listen and at times a frustrating one.  Track after track presented me with something different from the previous track and in some ways echoed his time spent with 29th Street Sax Quartet.

My favorite track on this album is Hartog’s piece “Well”. This piece is a loosely structured and orchestrated by Jim Hartog  on baritone sax, Art baron on trombone,  Tom Varner on French horn, Howard Johnson on tuba and Terry Clarke on drums. This piece has wistful and lilting freeform jazz feel. Hands down it is Hartog’s most creative and odd track on the album. Every instrument has aural space and seems to be playing a feeling more than just a musical line.  Admittedly I had to listen to this track at least 15 times before I felt like I understood what Hartog was telling the listener.  More than any track this piece made me glad to have bought the album. When I have time I will be transcribing this piece as a sax quartet with drums. (Alto, Tenor, Baritone, and Bass saxophones.)
The unexpected seems to be the best way to describe the various things happening on this album.  To prove this Hartog belts out a unaccompanied versions of Thelonious Monk’s tune “Epistrophy”. Unlike what you may expect from other renditions of this song Hartog takes huge creative liberties with time and structure. While I prefer the Monk version from his album “Thelonious Monk – 1963 In Japan CD”, this is easily my 3rd or 4th favorite version.
As you may imagine this album is not some garden of Eden.  There is just a tad bit of not so good to accompany the fantastic performances by Jeremy Kahn on piano and Essiet Essiet on bass.  My biggest complaint is neither with the music selection nor with the improvisations presented. No, my complaint is with Jim Hartog’s tone above “octave-G”.  Starting at that note and well into his palm keys his tone starts to thin and loose the guts it had in the lower register. It is so noticeable that it distracts from his playing. It is as if he has a physical issue with the instrument or just can’t muster the air support for the upper register. I doubt the later as his lower register really pops.
***Click below to link to the album on Amazon.com***
From Here to There