To date I haven’t reviewed any classical music. This is not because I don’t love it. Actually like many students, it was my first foray in music. It served as the musical foundation for my learning and is my second musical love. Sadly, due to the fact there there is very little classical baritone music produced and just as little repertoire written for the horn, there was little for me to write about. As a classical alto player I was awash with music but as a baritone player I was forced to play alto literature or arrangements from other instruments. Sadly none of these included the Bach Cello Suites as heard on this album. 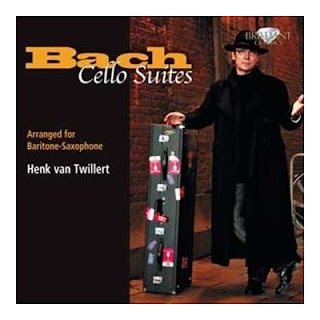 Henk Van Twillert shares his  interpretation of the music while preserving some of the improvisational feel written into J.S. Bach’s music. While this is a great goal for any musician to have, it is Van Twillert’s delivery method which makes this recording stand out. His fluency with the language of Bach and with the nuances of the baritone saxophone are evident in every track of this recording. His use of dynamic contrast and ability to make these solo lines move forward and stay interesting is without equal.
To be clear this album has only one performer, Henk Van Twillert on the baritone saxophone. Henk plays the horn the room in which he is seated. His tone is a full and rich with just the right amount of buzz to make you feel at times that you maybe listening to Yo-Yo Ma. I cannot over emphasize how full his tone is from the top to the bottom of his horn. Van Twillert has amazing control of his horn and it shows in the huge intervals present in some tracks. Intervals, which for some would highlight any embouchure failings, for him are par for curse.  Example of this is Suite No. 3 in C major Mvt. VI – Gigue.
Take Away: I rarely gush over an album but I feel that, despite a few slightly dented notes and phrase  liberties for taking a needed breath, that this album is an absolute must for all classical saxophone players and more specifically baritone players. This album has a lot to offer other instruments as well. It is a study in control, tone, and musicianship at a high level. This is a must own for me.
Follow the jump below to the Amazon page where you get this album.
Bach: Cello Suites – Arranged for Baritone Saxophone