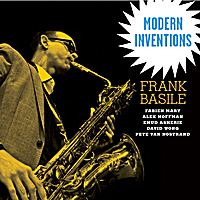 My first impression of this group was that they sound larger than they really are. This is clearly a testament to the expert arranging from Frank et al. The music and playing on this album is lively and true to the jazz tradition of tight arrangements, solid solos, driving rhythm section, and an approachable nature. This is not some esoteric exercise on one-ups man ship often present in albums in which there are stellar musicians. At no moment did this album feel like it wasn’t a team effort. Each person pitched in to make this album what it is.
What review of an album hosted on this site would be complete without a discussion of the baritone saxophonist? Frank Basile’s inspiration can be heard in his tone. There are pinches of Carney, dashes of Smulyan, and handfuls of Adams. Frank has a sound which is familiar but unique. It is both comforting and exciting to hear echoes of the greats playing modern jazz music.
After Frank there are two voices which really make this album. Those are Fabien Mary and Ehud Asherie. Fabien’s blend of Chet Baker’ish and Clifford Brown’ness makes his solo sections standout musically against the backdrop of the group; in a way he seems to add the edge to the sound of the group. Ehud Asherie on the other hand tends to rise out the music with his delicate lines and deliberate approach. His improvised lines never forget that trained and untrained ears will be enjoying this music. To that end his lines seem digestible to non-jazz ear as well as being exciting enough for the trained jazz-o-phile.
I do not wish to diminish the contribution the remainder of the band brought to the show. I will concede that each of them are spectacular musicians. Alex Hoffman’s full and dark tone on tenor saxophone plays well with the edgy Basile baritone. David Wong and Pete Van Norstrand feel as though they were riveted together. They seemed to play as a single unit, driving the music forward while providing the foundation for everyone else to build on. Wong’s bass solo on Fountain City Bounce was unexpected and enjoyable.
TAKE AWAY:  The only thing I feel would have added to this album is a trombone sound. Had Frank turned that sextet into a septet with addition of another brasswind I feel it would have completed the Little-Big-Band sound. Other than adding a voice I have nothing to change about the album. This deserves to be in every musician’s collection. It has variation and intensity that is sure to entertain just about any music lover.
Line up:
Frank Basile – Baritone Saxophone
Fabien Mary – Trumpet
Alex Hoffman – Tenor Saxophone
Ehud Asherie – Piano
David Wong – Bass
Pete Van Norstrand – Drums
Skip to content