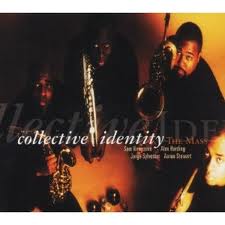 What this album is not, is every bit as important as what it is. This album is not is an homage to the great classical composers of bygone eras.  It is not a classically themed recital. What is this album? It is a jazz inspired exercise in modern composition and decidedly modern tonalities. This album features a collection of artists who’s individual skills blend well without the any auditory bravado or one-upsmanship. This album is gritty, urban, and full of passion that bleeds through the tracks even if it hard to stomach at times.
Alex Harding brings his passion and his improvisational style to the small ensemble. Just less than half way through the track “The Mass” Harding takes an improvised solo accompanied only by the passionate whoop from a fellow band member moved by the emotions displayed in Harding’s playing. If you are not familiar with Harding then you’ve been missing a wonderfully unique baritone sound. With his Selmer Mark VI and RIA mouthpiece he has the power to pierce the group but also the body to project the low tones. If this weren’t a modern jazz group I’d be less inclined to appreciate his edgy tone for more traditional quartet music.
The tenor saxophone can often get over shadowed by its higher pitched bands mates and relegated to supporting roles within ensembles. This is not the case in this group; saxophonist Aaron Stewart makes this classically maligned horn the darling of several pieces. His tone is the perfect match for Harding’s edgier baritone tone and the bridge between the upper horns and the lower horn. I would hesitate to suggest that he is in a support role as in a quartet all voices are important but he really has a subtle shine on this album which makes me want to hear more of him.
A favorite track of mine on this album is the Wayne Shorter classic “Nefertiti”. The group spun and stretched the piece in a way that I think Shorter would have enjoyed. Particularly the smooth improvised lines of soprano saxophonist Sam Newsome. Newsome’s soprano tone is something to be emulated. It is clear, full, and dark to the point of nearly stuffy. It isn’t stuffy sounding at all but rather blends cleanly into the mix but with just a bit effort cuts like a laser.
Is there one thing I would change about this album is that I would ask them to rerecord it but with more tracks like “Spirit take my hand”. This track is a Harding original and is a gospel inspired piece. In Harding’s original arrangement, his playing is a mirror of a Baptist minister leading his congregation.  The version of this piece on this album is less spiritual in feeling but still embodies Harding’s vision.

TAKE AWAY: This album is at times hard to listen to but rewards the listener with moments of advanced techniques and unique arrangements. Do I recommend you buy this album? Yes, if you like modern semi-abstract melodies and dissonant tonalities in small ensembles. If you don’t then spend your money on Alex Harding’s other albums.