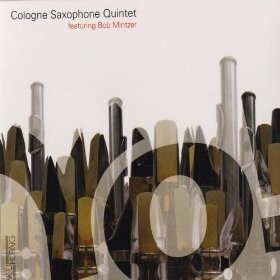 Haven’t heard of the Cologne Saxophone Quintet? You are missing an auditory experience. Aside from great arrangements, superior tune choice, the largest variety of instrumentation since the Nuclear Whales Saxophone Ensemble, and amazing improvised solos there are two thing which stand out in this group. It is the addition of Bob Mintzer and the Eppelsheim Tubax Contrabass saxophone. Bob shares a side of himself which is not clearly shown in his work with the Yellow Jackets. He brings a sensitivity that you don’t need and would be covered up in a group as powerful as the yellow jackets. It is in this smaller more delicate group that Bob shows his ability as an improviser to outline and allude to the chords as he weaves stunning and moving lines over the backdrop of a quintet.
As a longtime fan of Mintzer and of saxophone ensembles it was only a matter of time before I found this album. I assure you I am glad I had. This album is full of great arrangements of popular and original music. There is no classical, modern classical or avant-garde music to be found on this album. Instead you will find arrangements of music made popular by Sting, Vanessa Williams, Average White Band, and featured in the motion picture “Forrest Gump”. This is just the tip of the iceberg for this album as the originals written for this album stand firmly on their own as well.
I would be remiss if I didn’t talk about the sound which made me fall in love with this album from a gear point of view. Featured in several songs on the album is the Eb Eppelsheim Tubax horn. The horn is pitched an octave below the baritone and provides the grunt needed to convincingly carry the bass in pieces like “Pick up the pieces” and “Yo!” If you aren’t familiar with this horn from Europe manufacturer Eppelsheim you needn’t be ashamed. They are quite expensive and exceedingly rare in the musical world but they do bring a unique voice to ensembles. The tone is rather unique due to the horns slimmer and more cylindrical bore than that of a traditional a saxophone. The tone is somewhere between a contrabass clarinet and contrabass saxophone. With that in mind all of the Eppelsheim horns would do well just about any woodwind group. This is further backed by the fact that they produce Tubax’s in the keys of EEb, and BBb. They also have a more traditional Bb bass saxophone in production.
While this album has low end to spare it isn’t solely represented by Eppelsheim. The job is held down by Bass clarinet and Baritone saxophone as well. In the case of the baritone feature “Sie Sieht Mich Nicht” the Bass clarinet holds down the bass line freeing the baritone to take the lead. The baritone has a bouncing bass walk in Sting’s “Fragile” which works well with Mintzers moving solo.  This version, I might add is now my favorite version after the original.  Spread throughout this album is flute and clarinet parts in songs. This variety of upper voicing gives depth to the pieces and makes for sonic variation.
TAKE AWAY: Will this album change your life? Not likely but it is great listening and a wholely enjoyable way to spend a few bucks on an album For the record you can buy several of the charts from this album to play with your own group.
Skip to content