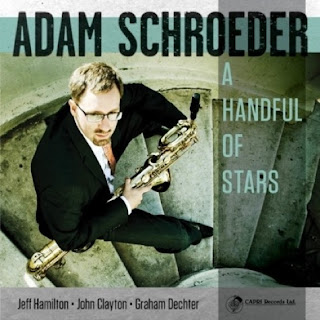 There is a pensive moment, just after you hit play on your music player, as you wait for the first note from the soloist on that new CD. You wait as the rhythm section sets the scene and builds up to the moment when the soloist must speak. It is at that moment that I am most nervous. My mind races with 2 thoughts over  my decision to purchase this album.  It is not until the soloist takes their first breath into the album that I can rest easier.  For this album the first note Is the most important. Adam Schroeder’s first note sets the stage for the magic that follows.
Some in the saxophone web-o-sphere, *cough* saxontheweb *cough* have claimed that Yamaha horns are sterile sounding. That because they were born from a land of ritualized perfection, mathematical accuracy, and eastern craftsmanship that they lack soul or more specifically a uniquely Yamaha sound. Well Adam Schroeder puts that fallacy to rest with this album. His tone is his his to do with what he will and he does. At times it’s gritty and and at others butter smooth. Schroeder plays throughout his entire range without ever needing to reach for altissimo or ignore the nether regions of his low horn. At first I thought he might be playing it safe but when you listen closely you hear that he places tone and style above sonic tightrope walking and ultra-fast licks.
This is one of those albums I wish I had heard when I was starting out on baritone saxophone. Schroeder and his group compliment each other superbly. Each instrument lends a tonal character which compliments the others while still maintaining their unique voices. It is an exercise in sensitivity, awareness, and mutual musical respect. There is no better example of mutual respect than the pairing than bari sax and upright bass on the duet “Just A-Sittin’ and A-Rockin'”. The two wind and weave lines into and round each other 3 minutes and 45 seconds of calm yet edge of your seat listening.
This is a straight ahead jazz album with masterful playing and an attention to detail which deserves to be heard.  This album feels nostalgic and comfortable yet still has a fresh vibe that makes it stand out on the shelf.
TAKE AWAY:  Why don’t you own this album? Because until now you didn’t know about it. But now that you do, go get it. This album may not change your outlook on playing but it will give you a smile you can’t get any other way than with from a passionate musician sharing his love.
Adam Schroeder – A Handful Of Stars