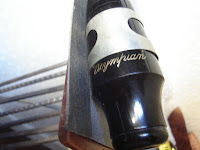 After that Carney sound? Maybe your vintage horn just hasn’t given you the sound you expected. Giant chamber, steep beak profile, and closed tip. What more could you want from a vintage mouthpiece as big as two modern metal pieces. This piece is an experience all its own and surprisingly not at all as horrible as I expected.

When it comes to baseline mouthpieces I usually go hard rubber and close tip openings for students new to the baritone. Usually a Yamaha 5C with a 2 to 3 1/2 reed depending on brand and student experience levels. I feel that the 5C offers enough variety that the player can reasonably cover most school genres of music all the way into college if needed. In fact I keep a 5C along with some Vandoren 4’s just in case I need to play in a holiday ensemble, though I don’t get those call as often as I used to. On a whim I bought this vintage piece of rubber.

The first thing that caught my attention when it arrived was how heavy it was. It weighed a few ounces more than my rubber Berg and Link. This was not a surprise as the piece is over 2.5″ in diameter. On close examination I identified a decidedly older design. The piece had: wide rails, scooped side walls, a deep baffle opening to a monster chamber, and a smallish shank. The internal volume of this piece looked to be 25% larger than that of my Berg but only 10 – 15% larger than the 5C.

This large volume made itself readily heard when I strapped a hard reed to the piece and began to play. On my YBS-61 I had to push piece nearly a centimeter beyond when I would place the 5C on the neck to make the piece play in tune. As you may have guessed, the large internal volume made the piece play very flat. After warming the horn up and tuning again I was able to get pretty close to in tune but I had a hard time keeping from falling flat on low notes in soft passages.

The tone was very much what I expected when I bought it. It has a warm, introspective tone that gets thin in the upper registers. The close tip opening didn’t help em either as the tip felt closer than my C*. If I had to guess it would be in the .70 – .85″ range. This piece is hard to put a lot of air through. Projection? As they say in New York, “Forget about it!” Perhaps for a very small venue this would work but on a modern horn and for modern uses its quiet limited.

TAKE AWAY:  Short of amplifying this piece the only way you can get it to the back of the audience is if you threw it. On a vintage Conn or Buescher this mouthpiece would likely be an amazing piece but on a modern horn it’s poorly suited and visually intimidating.

Sound samples on the way 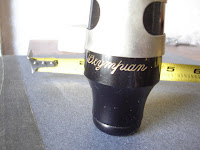