Whenever i hear a young musician asking for opinions on what their first mouthpiece upgrade should be when moving from a classical setup I find myself suggesting a proper rollover baffled mouthpiece. While it won’t have the pizazz of a high cliff baffled like a Guardala or the novelty like a Strathon Adjustone, what it will have is the flexibility to allow a young player to find their personal tone.

What is the baffle of a mouthpiece and why does it matter? The baffle is the part of the mouthpiece between the tip and the throat or chamber of the mouthpiece. This area has the most effect on the fundamental tone the player gets. More than the material, finish, or brand of the horn. While the tone concept starts in the mind and ears of the player the first physical manifestation of the tone starts just after the tip of the mouthpiece.

The baffle, in general, comes in 4 basic designs with all others being derivatives of these four.

The first is the flat baffle. This is usually found in classical pieces like Selmer S-80, S-90, Soloist, Vandoren Optimum, and many other classically oriented mouthpieces as well as a few Jazz pieces like the Theo Wanne Ambika. These generally have a focused and even tone. The mouthpiece doesn’t seem to color the tone as much. Kenny Garrett is a great example of how intense and jazz a flat baffle can sound. 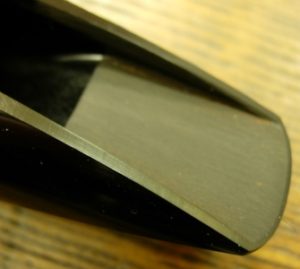 Second is the Step baffle (shelf baffle, table baffle, cliff baffle, etc.) which is characterized by the baffle rising quickly to be closer to the reed that a straight baffle. It focuses restricts the air-stream blowing through it and, by the laws of fluid dynamics, increases it speed through the restriction. Step baffles tend to be great with altissimo as the design seems to emphasize the higher partials in the tone. This leads to a brighter tone with more projection. There is an endless stream of high step baffle players, myself included,  as it’s probably the most popular at the moment but Michael Brecker, Mike Phillips, David Sanborn, Nick Brignola, and many others give great examples of brighter high baffled sound.

The third is the scooped or what I call the inverted rollover baffle. For this piece the area behind the tip opening of scooped out. This leaves what I call a black hole for good tone. I’ve found these to be resistant and generally lacking the high partials that give the saxophone it’s characteristic tone. You’ll find these old timers on ebay as the super vintage pieces. The scoop baffle is usually paired with scooped side walls and a monstrous chamber. You will be mistaken in thinking that this design would make a good classical piece. They have nearly no projection, tend to play somewhat flatter, and for all the real state they need inside the body of the piece has to be very large compared to more modern pieces, post 1940. These pieces have their place but i can’t explain where that is in the modern musical landscape.  *edit* Rico Graftonite has a slight concave area behind the tip. 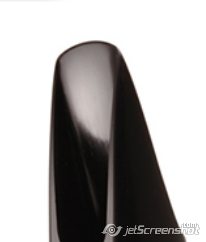 Lastly, is the roll-over baffle. It combines a raised area behind the tip and a long flat area just after that. It’s almost a combination of the cliff baffle and the straight baffle. This amalgam of the best features of both is why i think it should be recommended to students as their first upgrade as they enter the jazz world. The raised section behind the tip speeds up the air through the opening boosting some of the high partials while the long flat baffle behind it aids in creating a consistent tone across the registers.  This combo gives the player the ability to brighten or darken their tone at will without considerable effort. A mild change to close the oral cavity can give a brighter tone than the straight baffle or with a relaxed oral cavity you can darken the tone to a vintage sub-tone sound.  Chris Potter is a great example of a killer rollover mouthpiece tone, though his vintage Otto Link likely has a higher rollover than more modern links the effects are still obvious.

While the oral cavity makes a difference for all mouthpieces the amount of the effect is dependent on the mouthpiece type. Trying to darken a small chamber step/cliff baffle piece just by opening out oral cavity is possible but will likely be tiring and the effect much less than with a different baffle shape. The effect can go the other way too, as trying to brighten scooped baffle piece is nearly if not completely impossible with the oral cavity.  So clearly it’s a case for the right tool for the job. I do believe that most aspiring musicians looking for their first upgrade will likely not need to sound like Sanborn or even Garrett. Instead, steering them towards a mouthpiece with immense flexibility and directing them to listen to the great rollover players before them can lead them to a lifelong love of the rollover and possibly the last mouthpiece their ever buy.

As this is a baritone site i have to discuss this from a bari point of view. I think baritone players have a lot of leeway when it comes to the upgrade path.  I think a Otto Link Tone Edge is a good first step towards to the more powerful rollovers as you can get from makers like: Theo Wanne Mouthpieces, RPC Mouthpieces, AM Mouthpieces, 10M Fan Mouthpieces, and many more.

Marching band: If a student is compelled to play bari sax on the marching field then 3 things should happen. First, the band director should be punished. The bari is a delicate horn despite its size and it’s voice will never carry as far as a higher pitched instrument. Secondly, you should correct any young bari player who think’s it makes you tough to march the baritone. That’s bullshit, it just risks injury as even the best harness can only do so much for a developing body. Lastly, the student should be steered to the lowest step baffle piece they can get. A Berg Larsen 1 or 2 baffle at a comfortably open tip opening. Pair this with a plastic coated reed and the player could possible coax the best sound and best volume available to the big horn.

Concert Band/Classical Performance: A Selmer S-80, S-90, Rousseau, Vandoren Optimum and many other straight baffled pieces are inexpensive and allow the player to assume the role as support to the low wind the bari is ususally written for.

Big Band: Here’s where things get wacky. A good rollover will help the student blend yet still offer the punch during a solo section.  Once the young player goes to college they may wish for a bit more power and upgrade to a cliff baffle but if they talk to one of the custom makers listed earlier they will likely find that the maker can make them a rollover that gets most of the power of a cliff/step baffle.  At the end of the day blending with the section trumps most other tone based concerns.