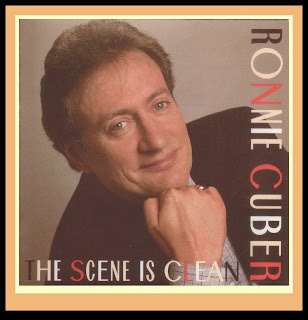 What do you get when you combine the dinner scene from The Nutty Professor with the skill and talent of a world class saxophone player Ronnie Cuber? Why,  The Scene is Clean of course.

This latin inspired album surprised me constantly as Cuber plays nearly all of the woodwinds recorded. In any given track he has recorded at least two horns  parts. Whether he is playing two or three part harmonies over dubbed on alto, tenor and baritone or a soulful line on flute Cuber sounds true to each horn individually while bringing his unique improvisational style to each. It goes without saying that Cuber is quite likely the master of latin-bop baritone saxophone and it shows in spades on this album.
While it is not uncommon for artists to overdub parts on to a track to fill in the sound, complete a harmony or when additional musicians are not readily available. Whatever Cuber’s reason was it was a fantastic choice for the overall sound. It is this writers opinion the additional control over the sound was likely the reason for simply dubbing the additional saxophone voices. Thankfully his voice on each horn is unique enough that it doesn’t distract from the listening experience.
One has to appreciate the commitment Cuber makes to being stylistically authentic to his art. The second track Adoración by Eddie Palmieri is true to the salsa tradition while adding a dash of hard bop to the mix. On this track Cuber has scored it to sound nearly as full as Palmieri’s band of the 70’s. This happenes to be the only track in which their is anothe rhorn player. Lawrence Feldman accompanies Cuber on flute. Hands down this track is my favorite on the album but not by much as there is a lot to love.
There are several Cuber originals in the mix. Arroz Con Pollo, Mezambo, and Fajardo. Arroz con pollo made a reappearance on this album from his 1991 album Cubism. I’m quite glad it did, Cuber included a more relaxed introduction to the song and gave the song a new improvised breath. Hearing him take the solo section in a new lyrical direction while maintaining a few ques from the previous recording I was very familiar with added a great deal to listening experience.
Now what would a tried and true Cuber album be without a driving blues-rock piece? He did not disappoint on his track Tee’s Bag. This track features Joey De Francesco playing a smoking organ solo that is nearly the perfect example of how to systematically build a improvised solo. De Francesco builds his solo carefully and passionately, then in the style of great lyricists climaxes powerfully then rides it out with all the fire and brimstone of a southern minister.
TAKE AWAY: Simply put, this album should be in your possession. At under $5 used on Amazon and under $10 new it is a steal for great music from a great artist.
Performers
Ronnie Cuber – Baritone, Alto, Tenor, flute
Lawrence Feldman – Flute (track #2)
Geoff Keezer – Keyboards
Joey De Framcesco – Organ
George Wadenius – Guitar
Tom Barney – Bass (except tracks #2 & 4)
Reggie Washington – Bass (tracks #2 & 4)
Victor Jones – Drums
Manolo Badrena – Percussion and drums (except tracks #2 & 4)
Milton Cardona – Percussion and drums (tracks #2, 4 & 8 only)
Tracks
1. The Scene Is Clean
2. Adoracion
3. Song For Pharoah
4. Arroz Con Pollo
5. Mezambo
6. Fajardo
7. Tee’s Bag
8. Flamingo
Skip to content