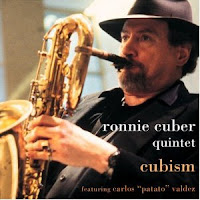 The album is a multi-genre music adventure with Latin echos from the past and a passion which reaches forward and demands we listen. Whether you like or dislike music with a Latin flare this album has a little something for every listener. From straight ahead, bop, and rock, this album is loaded with his precise use of articulation and rhythmic variation which is textbook Cuber and is tremendously enjoyable.

If you prefer the straight ahead  jazz then set your ears to bop and listen to the track “No Smokin” and hold on for the ride. Joe Locke on vibes explodes into his solo section and sets the perfect stage for the solos of Cuber  and Bobby Broom (guitar). This track is paired expertly with the track “In a sentimental mood” which as a tribute to Harry Carney is both gentle and soulful.

Of course it wouldn’t be a Cuber album if he didn’t do the unexpected. On the swinging track “I Ronic” Cuber plays tenor saxophone. His tenor playing features all the excitement that cuber brings to the Baritone while not sounding disingenuous to the tenor tradition at that time. In some ways he plays the tenor like a smaller baritone. Which suits my ears just fine.

It goes without saying that this album is a product of its day. By this I mean there are stylistic artifacts of being an early 90’s jazz-fusion type album. Joe Locke’s Yamaha DX7 keyboard really reminds us of what decade we are listening to without being too much like the over electronic sounds of Cuber’s album “Passion Fruit“. Though not as dated sounding, the hard driving rock-funk track “Cheetah” is  a prime example of what was happening in pop jazz of the day.  Of course this track would not be possible with out Ben Perowsky’s driving drumming. He pushes this track along like no one else and his drumming is as genuine sounding as any rock drummer of the day.

This album touches on several Latin traditions without trying to be something it is not. The tracks range from the afro-cuban of “Arroz con pollo“, to the swaying bossa nova of the title track “Cubism”. Cuber has had a long tradition of playing Latin and Latin inspired music. This began as early as his work on Eddie Palmieri’s 1973 album “Sons of Latin Music”. At least one Latin inspired track can be found on most of his albums. On this album the addition of Carlos “Potato” Valdez really lends the afro-cuban credibility which is hard to capture when the percussive responsibilities lay purely with the set drummer. on this album both Carlos and Ben seem  to trade phrases and and lead each other on rhythmic trails.

TAKE AWAY:  This album has had a regular place in my listening roundup and you would be hard pressed to find an album which brings as much enjoyment for as moderate a price. In this case under $10 from Amazon.