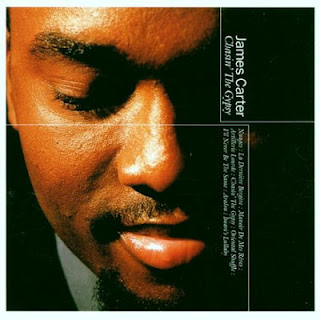 While I’m not the worlds most dedicated James Carter fan I do recognize the guy as a virtuoso on the saxophone. After watching him play the Bass saxophone on Youtube videos I decided to spend some time listening to him play it on this 2000 release.

The first thing to get out of the way is that i didn’t like any recording of James on bass sax as displayed on Youtube. Aside from the the lack of quality audio and clips which lacked musical context in most cases, I just couldn’t stand his aggressive attack of the horn. It was as though he wanted to punish the horn for being so big and heavy. Determined not to let poor Youtube camera work deter me from finding joy in his work I ordered a CD. Thank goodness I did, my ears were in for a surprise.

Before I get ahead of myself, this album is a tribute to the music of Django Reinhardt. This fact with the knowledge that James Carter was playing his bass was enough to make me pull the trigger on this purchase. Well, that and knowing that his sister was playing violin. To that I must add that his sister is a great violinist and impressive improviser as evident in the back and forth licks on the track “Avalon” and a few other solo sections scattered throughout the album.

Rather than take apart the entire album I will focus on the songs in which Carter plays bass saxophone. This is a blog dedicated to bari and bass saxes so what else would you expect. Before I leave the the other 6 non-bass tracks behind I will say that they are common James Carter. Full of flourishes, slap tonguing, musical overindulgence, and a flare for the extravagant. Carter brings his unique voice to everything that he plays. Love him or hate him he is still making more money than 99.9% of the saxophonist of the world and produces albums of legit jazz almost yearly.

Now for what we all came to discuss; bass saxophone. Carter kicks this album off in a bass’tastic way. “Nuages” is a gypsy swing tune by Django Reinhardt (from this point on known as D.R.) and Carter holds true to the feeling of the original. His playing here is lyrical and deliberate. He manages to curtail some of his usual musical bravado and really falls into the lilting swing style. This is the track I feel best represents what he can do with a bass saxophone.

The second tune “Artillerie Lourde” is a driving swing tune by D.R. which Carter falls back to his more tenor-like playing style. His use of slap tongue, split tones, and multiphonics are in play towards the end of the track. While impressive from a technical point of view I don’t feel they added a great deal to the musical narrative laid out earlier in the track. Now if you are a fan of Carter then you know this is par for the course.

The last of the bass tracks is the tune “I’ll never be the same” by D.R.. This track features the bass saxophone in a supportive but lyrical role. Carter adds firm support to Romero Lubambo’s Django inspired lines until about half way through the track. At this point he opens his solo with a powerfully subdued line. Of course he then takes it close to the “playing like a tenor player” line and back again. But at the end of his rather brief solo section he returns to the support role. I feel that in this one track Carter has defined a modern role for this often ignored horn.

I would be remiss not to discuss his tone and equipment. Carter has a unique tone on the bass saxophone. His setup on horn is likely an International Winds IW-661 bass saxophone and played with a Geoff Lawton  baritone saxophone mouthpiece. I cannot confirm this exact setup as there is very little written on his bass saxophone setup but the evidence is that he’s been seen with an IW basss saxophone and his choice of mouthpieces on all of his horn are Geoff Lawton’s.  With that setup in mind it is not at all surprising that his tone isn’t as warm as that of Adrian Rollini or as broad in depth as the amazing tone of Bert Brandsma.

Take Away: The 3 bass saxophone tracks are some of my favorite featuring this underutilized horn. Would I buy the album again for just these three tracks? No, I would purchase them on iTunes individually and save a few dollars.