Envisioned by Pete Thomas, actualized by  Edward Pillinger, and refaced by Norbert Stachel; this PPT mouthpiece lives up to its ‘Power’ moniker. But is this particular piece I’m reviewing actually representative of the model as  conceived by Pete? I suspect that it’s not quite the same as factory spec.

DESIGN: This piece is made of a beautiful translucent resin created by Ed Pillinger called Onyxite. The eye catching material makes it stand out immediately. As soon as I had this piece on my horn the other sax players in the big band had questions. The barrel shape of the body is larger than your typical Berg Larsen but smaller than a vintage pickle barrel bari piece. As I had to default to a Rovner ligature though the Rico H provided by the mouthpieces owner worked fine the Rovner gave a bit more grab on the reed.

The modifications to this piece were done very well. Norbert Statchel clearly knows his way around refacer’s tools. The table was flat and the tip rail was even and smooth. The level of craftsmanship used in the modifications was quite high.

TONE: Having listened to Pete play his on YouTube I was geared up for a full bodied experience. I prepped myself to enjoy the warmth and presence of a Otto Link on steroids combined with big helping of Berg Larsen tone. What I actually got when I paired it with a few reeds choices was a bit more towards Dukoff Power chamber combined with Rico Metalite with a pinch of Runyon Bionix. In other words it was bright, loud and somewhat hard to control.

On close examination I believe what has happened is that in opening the tip of the mouthpiece the floor of the piece was brought closer to the reed and shrinking the area behind the tip rail. This area is of prime influence to the tone of a mouthpiece. So instead of adding a bit of rollover to the area behind the tip to warm the tone it looks to have been left the same as created. since the person I borrowed the piece from purchased it already modified it is not possible to know if the option of working the baffle was available and not selected or never considered. 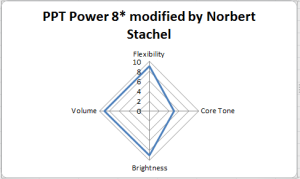 Reed friendliness: I usually use Légère reeds or as of late Forestone reeds. This mouthpiece was a bit unruly with the Légère but worked well with the Forestone and Rico Jazz Select Unfiled. The larger tip opening required me to use a half step lower than my normal strength in order to get responsive articulation palm notes that were not out of tune.

VALUE: As this particular piece as modified does not work well for me I can say that original PPT  mouthpieces are an excellent value. Whether you buy them new or used they seem to be under represented in the marketplace. Also adding to their value is the fact that Pete Thomas donates all profit from direct sales from his site to charity. This act of giving increases the value of these piece tremendously. Pete’s Fundraising Information Page

TAKE AWAY: The original PPT as purchased at Pete’s page may be one of the top 10 value per dollar spent on bari mouthpieces. This modified piece however is an acquired taste. It’s loud to be certain and quite powerful but forget about playing this piece in a big band. This is a power player and can fend off electric instruments as well as any charging predators. (please don’t attempt to defend yourself from a charging predator with a saxophone).