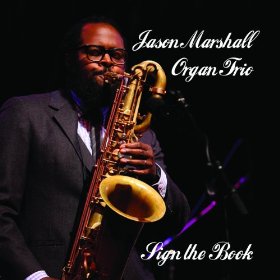 Jason Marshall is often compared to Pepper Adams as a titan of the baritone but I think that is far too limiting for what Marshall can do. In his playing you can hear hints of his baritone influences including: Smulyan, Cuber, Bluiett, and Brignola. I don’t mean to suggest that he is some sort of amalgam of these players.  Instead his seems to have taken the best of each player and blended them with his own experience and background to generate his own unique sound. In terms of style he is a clearly a modern bopper or hard swinger depending on how you delineate the two.
P. Mauriat and Jody Jazz could hardly ask for a more perfect musician and performer to display their wares. I’ll admit it; Marshall’s playing single-handedly made me want to play test a P. Mauriat Low-Bb baritone. Before him I’d not even heard of a modern Low-Bb horn being made. After hearing him I knew that one day I’d have to own one, seeing as I rarely play a low-A as it stands.  Marshall’s baritone voice is clear and has a large range, although his improvised lines don’t venture into the lower range too often. As with most baritone players we tend to solo in the mid to upper range. It is this which I feel gives some listeners the idea that some baritone players play like a tenor player.
The other big voice on this album is that of Hammond B3 player Ondřej Pivec. I think we are in for a long career from this musician. He is talented and it shows in a huge way. His awards list includes 10 music awards in 7 years including 2 Czech Grammy’s. By his performance on this album they are well deserved.  His playing echoes the B3 tradition on American jazz throughout the ages. I enjoyed his soulful playing so much I had to hear more, which is not something I review but I can say that Pivec is my current favorite B3 player. Though I can’t name too many other B3 players at the moment.
As you may have noticed I love albums full of original music. It is not to say that I don’t enjoy hearing the standards regurgitated in new and innovative ways but for the most part even the pros don’t reinvent the wheel. Most stay close to the standard on the head then take liberties in the improvised sections. This formula works and is taught in schools from middle-school on up. For me the thrill is hearing modern younger players writing and integrating the music they grew up listening with the jazz they grew to love as musicians. Marshall has done this on nearly all of his tracks. The R&B and funk influences pervade many tracks and add a danceable vibe to the music.
TAKE AWAY: This album didn’t come as a surprise or set the world of saxophone on its ear. No, what it did was present great playing in an accessible format that even an untrained ear can appreciate. This is no small feat considering the fact that traditional jazz has been declining in popular appeal since its heyday.  But that is a topic of for a different day. This album is worth owning at twice the asking price.
Performers:
Jason Marshall – Baritone Saxophone
Ondřej Pivec – Hammond B3 Organ
Russell Carter – Drums
Paul Bollenback – Bass
Skip to content