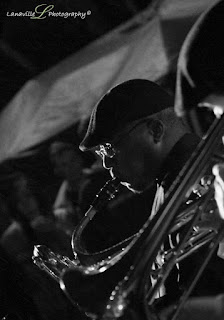 Welcome to my blog modern bari sax. My name is Zel and I’m just that, a modern bari sax player. I play Baritone saxophone as my primary instrument. I do on occasion find an alto, tenor or flute part land on my stand but my main instrument is the Baritone sax. I had originally posted this in Nov of 2011 but due to popular request decided to repost it.

I can be seen in the  ESPN Monday Night Football promo with Hank Williams Jr. *edit* Promo canceled due to Hank’s ability to upset the media viewers. Promo is still available on Youtube.*/edit*  I have played in groups who have opened for bands like Reel Big Fish, The Pie Tasters, and Trivium. I can be heard on the 2007 acoustic metal album “Mad to Love” by Meka nism, 2009 rock album “Porn on the Cob” by F.I.P., 1997 ska album “Enter the Kabuki” by Fat Timmy, and the still in production reggae album by Shady People due out in 2012, 2013 featuring the saxophone playing of Trent Spears and Anthony Cole.

I am a regular stand in player for a number of groups. I have been bringing the sound of the baritone saxophone to small groups ranging from Western Swing and folk music to jazz jams.

Like many others my musical influences include Davis, Coltrane, Adams, Cuber, Diblassio, Parker, Garzone, Smulyan,  and  Brignola. These are the people whos music directly, though not always evident, influence my playing. But I am a long time lover of Reggae and 2nd and 3rd wave ska. Everyone from the Bosstones, Reel big fish, The Specials, Mustard Plug, The Pie Tasters, Less than Jake, and Toots and the Maytals have influenced the rest of my musical tastes. I am lucky to have opened for some of these bands through the years.

Here I will also be reviewing albums which feature baritone and bass saxophonists from across the decades. I do this because of my own difficulties finding baritone inspiration outside of Pepper Adams and Gerry Mulligan. Lastly I will be reviewing horns and where possible posting clips. It’s my hope you will read along and share your opinions on the things you see here and perhaps discover an album you’ve never heard of.

You can see me briefly at 0:23 sec in the first. This was a very long shoot for a such a short promo. I believe they shot in excess of 60 hours of film per camera, and there were many cameras. Though I didn’t record the audio we did play the song about a hundred times.
Here’s a piece I did with a the artist Ms. Meka Nism. It’s a song called “Break” In this piece she wanted the bari sax to carry the bass line, while interspersed with short flute interludes. This was one of the most fun recording sessions I’d ever done. Tons of energy and in the end it was the two of us making music.
Lastly, Here I am performing with the “ska” band Teflon Don *Tef London Ska on a piece called “One for the drinkers”.
*/edit*
As you can see I’m not a solo performer but I do spend a lot of time with my horn. I have had the privilege of working with many great musicians of all genres and look forward to sharing my opinion and hopefully getting yours along the way.
For those who care: for the song “Bedlam” the mouthpiece I was using was a 5* Otto Link Tone Edge. For the Monday night Football shoot I was playing a E. Rousseau JDX7. Lastly for the last video I was playing a Yamaha 5C with RJS 4S.