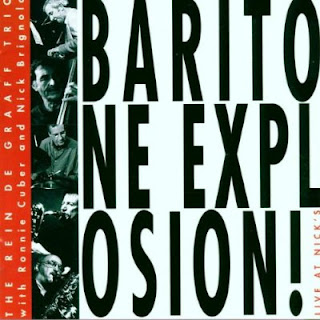 This album is the auditory equivalent of watching Godzilla and Mothra battle it out in the center of a large Japanese city. Each of the solo musicians is a titan and brings a level of musicianship which both challenges and compliments the other. The titans in questions are baritone saxophone greats, Ronnie Cuber and the late Nick Brignola.
The hardest part about writing this review was taking off the headphones long enough to get anything written. Each of these men gives life and passion to the baritone saxophone in ways that aren’t easily explained. This is clearly a testament to their love of the horn and their dedication as musicians. Their voices on these horns are a different as night two peoples speaking voices but blend so well that at times it’s hard to hear where one begins and the ends. Clearly, this album would have been even better if it were a video of the concert.
The musician who obviously brought this into fruition is Rein De Graff. His piano virtuosity is apparent throughout this recording without starting a game of one-upmanship. His playing is delicate, pervasive, and moves the music forward without ever letting the two lumbering horns run away with the set. To hear this rhythm section play is a wonderful exercise in presence and support without dominance and ego. “The right note, at the right time” as my first saxophone teacher used to say.
This album features some of my favorite jazz standards: Blue Train, A Night in Tunisia, and In a Sentimental Mood to name a few. Because of this the album has the feel of a great jam night out at a jazz club rather than an extensively mixed down studio recorded album.  There are times when each player chips an altissimo note or comes in a fraction of a second too early or drops out of a long note due to breath. But that doesn’t  take away from the listening experience. It helps us hear that these musical super men have to breath like the rest of us musical mortals and that keeping super accurate timing can even be tough for the pro’s at time.
Not since the Three Baritone Saxophone Band has there been a better batch of players on the baritone in one recording. Though to be forthcoming this is two thirds of the Three Baritone Saxophone band and in a way it does feel like it’s missing a little Smulyan but that sentiment is short lived when the music pickups. All the pieces on this album have a live energy you don’t get from the expertly recorded Three Baritone Saxophone Band Plays Mulligan” album.

Of course I don’t want to sell short Rein De Graff or the rest of his trio. These musicians are close and form the core on to which the magic of dual bari saxes can expose itself. Rein is a monster player in his own right and a virtuoso by any measure. His solos are skillful, complex and endearing to the listener. That coupled with the intimate musical relationship between Ineke on bass and Serierse on drums is the formula for a perfect rhythm section.

TAKE AWAY: This album sets the bar high for baritone saxophonists. The individual playing is playful and exciting. There isn’t a single track which disappoints. This is an album to own and enjoy regularly as there is something new to discover on every playing..