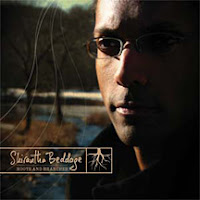 Few albums make me want to find the player and enroll in his college but this album makes a great case for Beddage’s music department at Humber College (Toronto, Canada). Beddage proves wrong the Mencken quote that “those who can, do; those who can’t, teach”. It is clear that his love and passion for music has given this album its shine.
Beddage composes melodies in a wonderfully straightforward and mastered way. He has something to say and takes his time in developing his thoughts throughout a piece. In such, his compositions average 6 minutes and peak out at a little over 8 minutes. What stands out for me is that this album is all Beddage original compositions. As a baritone saxophone music collector I can say with confidence that this is the first album in my collection of straight ahead jazz that does not have at least one non-original tune on it.
There is at least 2 songs on this album which may one day become a jazz standard in line with “All the things you are”, “My Funny Valentine” and “Autumn in New York”. The first is his piece “Seoul Sister” which features a memorable head section then one of the most lyrical piano solos on the album. Michael Stryker paints an aural picture so vivid you can almost see the notes. The second is “Le Petit Grenouille” which pays a bit of homage to Miles Davis’s “Seven Steps to Heaven” at its outset. This piece came as a huge surprise and a welcome pickup of the pace compared to the tracks before it.  I will admit that my first jazz album, literally a record, was a 2nd hand copy of Miles Davis “’Four’ and More”. I didn’t so much listen as devoured this album.
Beddage’s tone is a fantastic combination of Brignola and Cuber.  By this I mean to say that it has depth and a clearly baritone tone. His tone has a healthy dollop of buzz and a medium serving of baffle. If I didn’t know better I would have to think his piece is a François Louis. Then again it’s is nearly impossible to tell from listening what piece a person, the exception is an Otto Link. Beddage’s tone is the quintessential solo baritonists tone. It’s in your face and not to be mistaken for any other woodwind ever made.
Baritone is not the only horn that Beddage lends his voice to on this album. He overdubbed the tenor sax in some sections and on one track adds a husky presence on soprano. It is certainly not uncommon for me to mention that a bari sax player is playing more than one instrument on an album  but in this case his soprano playing came as great surprise. I am used to Diblasio playing a few tracks on flute or Schroeder on bass clarinet but in Beddage’s hands the soprano fit perfectly in this ensemble. His sop tone was full and not the least bit nasally or shrill.
TAKE AWAY: There is very little not to like on this album. Original compositions, expert playing, brilliant audio engineering, and audible passion make this album one to own.
Musicians
Michael Stryker – Piano
Jared Schonig – Drums
Ryan Kotler – Bass
Shirantha Beddage – Baritone, Tenor, Soprano Saxophone
Skip to content