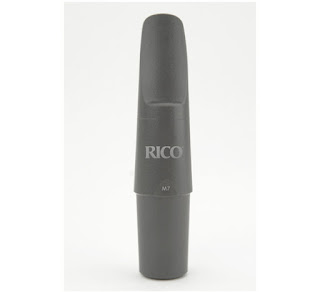 Metalite? Is it metal? Is it metal-like? What it is, is a whole  lot of mouthpiece in a small grey form.

First Impressions: The mouthpiece is oddly cheap feeling. If you are used to hard rubber or brass pieces then this one will feel like a child’s toy.

Ligature: I used the stock two screw ligature and a Chinese made Rovner-like ligature. I couldn’t tell the difference in tone between them.

Response: With the Brancher reeds the response was immediate and percussive. Sadly the tone was buzzy with the Branchers. The Hemke’s gave a good balance between buzz, response, and tone but was not perfect. It also didn’t help that I had a rather “wet” mouth today and had to drain the horn often.

Tonal/Dynamic Flexibility: I fought this piece from the get-go to get a restrained tone. This thing wants to wail and it’s a bit of a bucking bronco to rein in. I had to be very focused on where my tongue was and of how much mouthpiece to take into my mouth. This piece can have a broad dynamic range but it is not as easy as with a Link or S-80.

Other: Give this piece an arena and it will strive to fill it with sound but if you take it into a small intimate jazz jam you may be asked to leave.

Intonation: On my modern horn it played in tune as well as my other pieces but tended to blow flat into the palm keys. I have noticed this tendency on pieces with high baffles when used on my saxophone. It may be specific to my instrument.

Take Away: This piece has the potential to ruin a quiet soiree or to give a sonic shiv to the ear drum of a volume obsessed guitar player. The choice is up to the player, but as a tool of auditory projection this mouthpiece can’t be beaten for the money. It’s cheap, loud, and not for the faint of heart. For the bari player playing mostly un-mic’d gigs this piece is just what they need.

*** UPDATE ***
After spending more time with the mouthpiece  I think it can be played with more control and at volumes slightly less annoying than a 747 at takeoff. With that said the tone and timbre of this piece isn’t as nuanced at lower volumes as you would get from a lower or more rollover type baffle. I still think it is a must have in the case of every bari player who plays live un-mic’d gigs.

Please feel free to share your comments on my post or your opinion the piece being reviewed.

I recently got a chance to spend a lot more time with a new Metalite M9. What a difference the M9 is when compared to the M7. Reeds that played well on the M7 played great on the M9. The tone was better on the M9 and the responsive was also considerably better. All in all it’s a better piece than either M7 I had tried. Arguably the newer vintage of the M9 could mean that Rico had improved the overall quality of the mouthpiece since my last M7.  I recommend owning an M9 over the M7 if you can adapt to the larger tip opening.