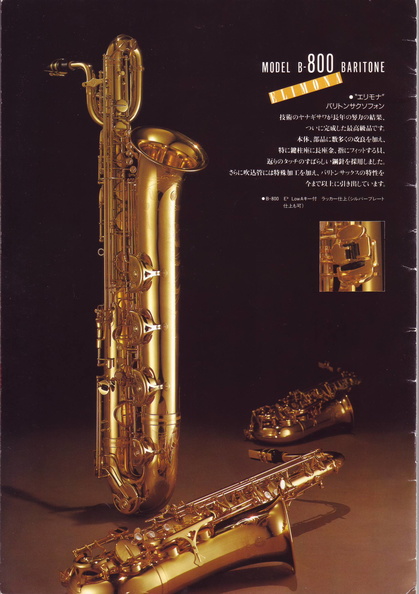 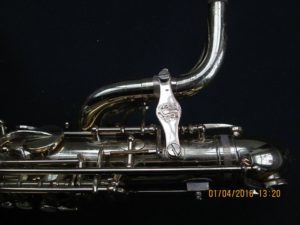 When you think vintage baritones what comes to mind? Most of us probably think of Conn 12m, Selmer Mark VI, Keilwerth made Couf’s, or King  Super 20’s. These are all fine and good as I’ve owned at least one of each but my ears and heart love vintage Japanese horns. Whether it’s a Yamaha made Vito horn or the Japanese made Martin stencils from the other plucky horn maker Yanagisawa, the craftsmanship is undeniably better than cottage industry stuff from China today. While I am a fan of these horns would I recommend them? In a word, YES!

When I saw the new Facebook alternative to Craigslist in my feed I had no idea it would lead to me finding a gem of horn just waiting for my hard earned cash. Best yet, it was priced extremely aggressively. It was my good fortune to be ready to buy within seconds of the posting.  I beat out the other purchase offers by less than 1 minute. Yes, I was fortunate. At the time the only Yanagisawa’s I’d had any experience with were altos that were new back in the late 90’s. They were fantastic horns and I suspected i’d enjoy this bari if it had as little as 10% of the tone those altos did. 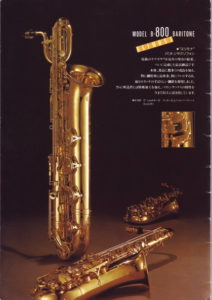 The Feel: The first thing I noticed when I received the horn was how heavy it was. This instrument is noticibly heavier than the YBS-61 that it replaced. I have no issues wielding this horn through a 3 hour performance or rehearsal the same as I do the Yamaha but when i pick it up from the stand or from across my lap i feel like it weighs a smidge more. I don’t think this affects sound and it might be that this horn is balanced differently than a Yamaha of the same era.

The key touches are slightly closer together on the right hand but still comfortable than a Yamaha YBS-61/2. The left hand palm keys feel a bit taller but more compact as well. All things considered I believe the ergonomics of the horn lend well to large and small handed players alike. Though the right hand high-Eb/F key will still be a reach for the more petite or younger player.

Like Yamaha and Selmer the low-a is perfectly placed for a smooth transition from the thumb-rest to low A touch. The mechanism is similar to those used by other manufacturers so if you are used to a Selmer low-a or Yamaha then you will feel at home. There is a peculiarity about the bespoke low-a. The low-a pad closes heavy. I’m not sure if it’s the combined strength of the springs or that there’s slop in the mechanism but it almost slams shut. It’s seals well and my tech has worked with me to place thicker more cushioned low-A pad but when I had it done it felt too squishy. So for now I can live it  it.

Improvements: What is missing from most vintage horns but is sorely needed is the triple strap ring. While it can be added to horns it doesn’t sit right with me to harm the lacquer on horn on purpose. Like most bari’s if you have a shorter or longer than average torso then the balance of the horn might fall more away or towards you depending on your support method. With a triple ring you can alter that balance. A short torso might choose the top ring to bring the mouthpiece closer and the taller the opposite.

The sound: This horn has a somewhat neutral over all tone when paired with a Yanagisawa mouthpiece. I like to keep a period correct mouthpiece by the manufacturer for each horn that I own. I feel it gives me the ability to sound s like the instrument maker intended. In this case a Yanagisawa hard rubber piece with this horn is a cool almost Lars Gullin or Mulligan’esq type tone. Overall an excellent combo. With that in mind the bari’s low overall inherent coloration really lets the player and mouthpiece develop a tone that is unique.

Intonation quirks: For the first time I’m happy to say there aren’t any significant intonation issues with this horn. A good tech can fix nearly all the funny quirks of intonation any horn has but to my surprise this horn plays evenly across all the registers. Yes, even the palm keys speak cleanly and with solid intonation.

Nits to Pick: The water key/spit valve just seems in the wrong place for a complete clearing of the moisture from the upper part of the horn. I’ve had my tech clean the orifice inside and out but when you try to clear the moisture there’s still a lot more than I expected remaining. I’ve taken to popping the neck off and pouring the moisture out.

My Yamaha YBS-61 was my reliable workhorse which never left stranded and played well even when it leaked like a sieve. It has recorded hours of playing and always exemplified the fine Japanese craftsmanship we’ve all come to expect though it had design issues. The worse of which was the single upper octave vent that meant that the high G and A were always stuffy and flat. The solution which I’ve mentioned on this blog is to move the upper vent and cobble a new linkage. Thank fully this horn seems not to have venting or any significant design flaws.

Take Away: This is a well made, robust, and fantastic sounding horn that I would still enjoy even had I spent twice the amount of it. Actually my tech still doesn’t believe i paid what I did and said he’d normally charge 3 times what I paid for it from the shop. I expect to keep this horn for years to come.