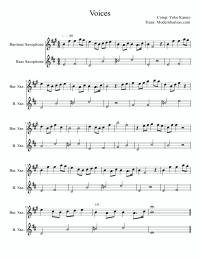 I have always been a huge Yoko Kanno fan even before I knew who she was. I heard her music in most of my favorite Anime growing up that when I became a musician I knew I’d have to learn her tunes. the first piece of her music and quite likely the first anime tune that really caught me was this piece Voices. it was in the anime Macross Plus. As a side note I, along with friends, role played the Macross saga during the early 90’s.

Here is my transposition of a version I found online for two voices. In this case it’s set for a baritone to play the lead line and the bass to complete the harmonies. The song is haunting and somewhat melancholic. I recommend playing this piece with “molto espressivo” and try not to rush it. Also, breath marks are not written so good breath support are important. Also I recommend practice this with a metronome set to what ever tempo you prefer. Keeping good time makes the retard at the end more dramatic.

The version below is nice if not just a bit slow.

The lyrics are included below. 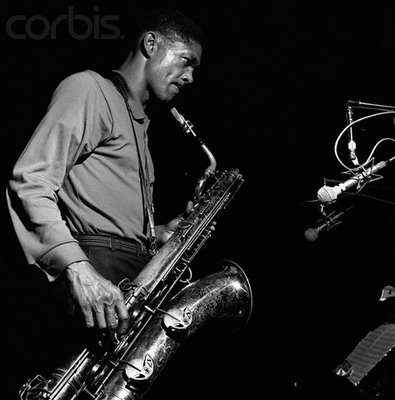 In recent months I’ve become a huge Leo Parker fan. He was composing and arranging at the birth of Bop and his music reflects the growing movement towards this new style. Leo played Alto first but later made the switch to Baritone when he joined  Billy Eckstine’s Bebop band. During the 40’s he played innovative musicians such as: Dexter Gordon, Sonny Stitt, Gene Ammons, Coleman Hawkins, Dizzy Gillespie, and J.J. Johnson. Ultimately, his musical legacy was cut short when he died of a heart-attack at the age of 36. No doubt his history of drug use aggravated the condition which killed him.

My quest to listen to and understand the motivation and styling of Leo has lead me to purchase and consume as many albums as I can and to learn more about who he was as a person. Sadly there isn’t a true biography of him. There are only fragments of factual information scattered across books and the internet. The true scope of who he was as a person is somewhat lost to history. This quest for more lead me to search for lead sheets and transcriptions of his original compositions. I believe that you can learn a great deal about a composers mind set when you study their work and fit it into the context of the era in which they lived.

Unfortunately there are but a few transcriptions of Leo’s solo’s and almost no lead sheets for his original compositions. I felt this is a tragedy of history that one of the great-grandfathers of bari saxophone playing and a pioneer of bebop should be so underrepresented. In some ways I understand why he might not be as popular today as his characteristic dark and punchy tone is completely antithetical to current bari tone trends and his improvisational style is not very modern sounding. But what it lacks in modern modal styling it makes up for it in pure style and concise  phrasing. There is very little gratuitous embellishments in his solos. His solos feel strongly rooted to the melody and compliment the music masterfully. I think this makes him a prime subject for introducing lay listeners, students, and anyone interested to jazz.

After a long and exhausting search I came across a Library of Congress listing for 31 original unpublished manuscripts written by Leo Parker. This was the mother-lode I was hoping for considering I could only find a few transcriptions of his solos and nothing else. It seemed to me that he had been almost completely forgotten by the jazz world and his music relegated to a few recordings and that was about it. Almost as if it weren’t good enough to be published. A quick email to a librarian at the Library of Congress gave me both hope and despair.

The librarian informed me that yes he can copy the manuscripts and deliver them to me in either digital or physical paper form but would not. He said he couldn’t because the documents are unpublished and would require the executor of his estate to grant me permission to have a copy of Leo’s manuscripts. Which raises the current hurdle, being that he died in 1962 and very little is written about his personal life how could I find his executor and discuss the manuscripts.

Well the search goes on and I will update the blog as I progress towards viewing, learning, and hopefully sharing the talent of Leo Parker.

If anyone knows his  family and can connect me with them or just has a clue please let me know.